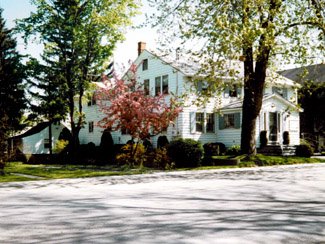 We have over 70 years of service to Eden and the surrounding community. David C. Laing founded the funeral home at its present location after returning home from WWII. During his time in the service he became close friends with another young man from NJ whose family owned a number of funeral homes. He asked David to join him after the war in working in his father’s funeral homes. Although his new friend did not survive the war this planted the seed and upon returning home he attended Simmons Mortuary School and opened David C. Laing Funeral Home in 1950.

In 1978 his son, Bill, joined him in the business and took over the reins in 1989 when David retired.

While remaining in the same location through all the years, we have worked hard to upgrade the facilities and maintain the same caring service. It has been our intention to keep the funeral home a “home” and not a commercial building.

In August 2009 we were proud to welcome Gabriel G. Johnson to our staff as a licensed funeral director. Gabriel has made his home in Eden.  On October 1, 2022 Gabriel became the President/Owner of the Laing Funeral Home Inc.