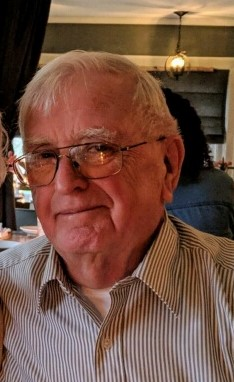 Please share a memory of Donald to include in a keepsake book for family and friends.
View Tribute Book
Donald Robert Schasel, age 81, of Eden, New York died Friday, January 03, 2020. He was born in Eden, NY; a son of late Rudolph and Sylvia (Willet) Schasel. He married his wife, Rosella (nee: Thiel) on July 2, 1960. They were married for 59 years. Don was a member of the American Legion and was President of the Eden/North Collins Food Pantry. He was loving father of Donelle Thomas, Robert Schasel and Cynthia (Jason) Newell. He was the grandfather of Ashley Held, Adam, Elizabeth and Matthew Schasel, Connor and Ethan (Kaitlyn) Mammoser, Sarah and Carter Newell. He was the great grandfather of Emily and Dylan Held and Amelia Mammoser. He was the brother of Harold (Alice) Benson, Gertrude (Elmer) Wittmeyer, Charlotte (Cyril) Wittmeyer, Randolph (Beverly) Schasel and Charles (Ethel) Schasel. Family and friends invited to call Monday, January 6,2020 from 2-4 PM and 7-9 PM at Laing Funeral Home Inc., 2724 W. Church St. Eden., followed by a Mass of Christian burial on Tuesday at 10 AM at Immaculate Conception Church, Eden. Flowers gratefully declined. Memorials to Eden/North Collins Food Pantry, Box 76, Eden, NY Words of sympathy on www.LaingFuneralHome.com
Monday
6
January

Look inside to read what others have shared
Family and friends are coming together online to create a special keepsake. Every memory left on the online obituary will be automatically included in this book.
View Tribute Book
Share Your Memory of
Donald
Upload Your Memory View All Memories
Be the first to upload a memory!
Share A Memory
Send Flowers